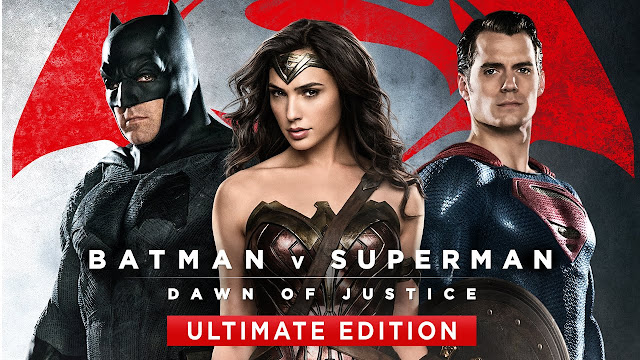 Well friends, we're talking about this one again. The Ultimate, ie. extended,  cut is upon us and so let's revisit this one and see how and if the extra half-hour of footage and bump up in rating to R has an effect on the film overall. If you want to read my thoughts on the theatrical cut, you can read the original review I did for this film here.

So the real question here is this: does thirty extra minutes of film and a bump up in rating change the film? Does it answer questions that were left after the theatrical cut? Does it improve upon things that were found to be problematic the first time around? Does it make the film better and add to the story? The answer to these questions is sadly, crushingly, and almost unsurprisingly no. My opinion of this movie remains unchanged from what it was after seeing it the first time in theater. What I enjoyed about the movie I still had a great time with, and what I didn't like about the movie was still painful and shitty the second time around. I wish it were different. I really do. But that's the hand we've been dealt, I'm afraid.

One thing that was held up about this version was its R rating. And it was held up pretty high as a selling point: the darker, the grittier, the down-and-dirtier version that you all wanted to see. And yet, for an R rating, it really doesn't venture far inside the border. I wasn't expecting this to be to Deadpool or Predator, but I was expecting a little... more, I guess. The R-rating seems to stem mainly from a slight increase in blood (the only instance where it was noticeably added was an unfortunate henchmen in the warehouse leaving a rather impressive blood smear on the wall), and a quick, heavily shadowed shot of Ben Affleck's naked backside in the shower (hence 'Buttfleck Edition'). Indeed, as far as butts in a Zack Snyder film, this is downright tame in comparison to the lingering shot of a naked Gerard Butler near the beginning of 300.


So, what did thirty extra minutes add? Not a whole heck of a lot, I'm afraid. One of the things it does do is make it more clear than someone is behind the scenes manipulating things to frame Superman. There are a couple of scenes between Lois Lane and Jena Malone's character that flesh things out a bit, including a part I like where they reveal the wheelchair bomb was lead-shielded and that Wallace Keefe didn't know even know it was there. It really does add something to know that he was as much as victim as everyone else, and that he had no idea what would happen. Some of the jarring cuts were blunted by the extra footage, or perhaps I was just ready for them this time. I still found it too jumbled, and cramming too many storylines into the film was going to make the cohesion suffer either way. An extension of the post-Knightmare scene where Batman sees The Flash is supposed to foreshadow upcoming stories. What stuck me was 'Lois Lane is the key'  and 'you were right about him' and 'find us' which struck me less as 'assemble the Justice League' and more 'Injustice storyline'. That might just be me, though.

I was hoping for an improvement to the pacing of the story. Alas, again not to be. It was still a strange mix of overstuffed, plodding, and dragging. It just chugged along, as if oblivious to it's own lethargy. This film should have, by rights, had us on the edge of our seats the entire time, if not in suspense then in sheer, overwhelming excitement. Instead, it seemed so smugly pleased with how 'deep' and 'dark' and 'grownup' it was that it forgot to be interesting, or entertaining. It still squandered two famous comic storylines, plus others that could have all made great, nay excellent, films in their own right (the whole government investigation into Superman could have easily led into a Batman vs. Superman showdown that would have made a hell of a movie) had they been given the chance. And it brings me great pain to say these things.  As it was, the Cynic and I found ourselves giving our own commentary over scenes, often using bits from How It Should Have Ended's episode on the film. Because with a three-hour runtime, we needed to do something.


Let's quickly run through the characters and see what the Ultimate Edition did for them:

Batman- Still one of the best parts of the movie. It's nice to see him not only kicking ass in an Arkham-game style warehouse fight, but actually see some detective work from the World's Greatest Detective. The fact that much love is given to the grappling gun makes me happy as a Batman fan. It really needs more use in live-action and I love how much more dynamic it was than other films.

Superman- I think Henry Cavill can be a really good Superman. I just think he needs a better movie. Let the guy be Superman, let him be who Superman is supposed to be, and I think he'll knock it out of the park. At least the guy smile once in a while FFS.

Wonder Woman- The other best part of the movie. What time she got, she made use of. I love her in the Doomsday fight; Bats and Supes might be heroes, but Diana is a warrior. She gets knocked back, she smiles and jumps right back in. Love it.

Martha and Jonathan Kent- Who are these people on the screen and what have you done with Superman's parents? These two are flabbergastingly out of character. Superman does what he does and believes what he does because of the values instilled in him by his parents. Supes is the DC version of 'with great power comes great responsibility', and to have his parents be so negative about him using them, to have his mother say 'be their hero, be their monument... or be none of it' is so... wrong.

'Lex Luthor'- Now look, I'm sure Jesse Eisenberg is a perfectly nice guy and nothing against him personally. I also know he's not a terrible actor. So why, why is this performance so excruciatingly atrocious? There was no reason on this earth for 'Lex Luthor' to be so cringe-inducingly awful. So for the next movie, can we somehow have him mutate into Clancy Brown or Bryan Cranston and call it a mulligan? There was no threat in this character, no cold, calculating menace, nothing intimidating. This was a spoiled, petulant child with daddy issues. Superman's great adversary this was not.

Alfred- I wasn't totally sold on Jeremy Irons as Alfred going into this the first time. And I thought he was okay. I liked him a lot better the second time. His 'getting to old to put up with Bruce's shit' attitude and general snark provided some much, much needed levity in the film. I want to see more of the interaction between these two, see more of Alfred tooling around the Batcave working on things.

Lois Lane- If there was any character I liked less following a second viewing, it was Lois. Ugh. They try to make her out like a plucky, independent reporter, but it's just a gloss. She's classic damsel in distress, classic helpless/unhelpful female character. Especially in the last fight once Doomsday shows up, it's like, why are you even here? Why are you so useless? Why are we cutting away from this fight scene so you can make eyes at Superman after he's saved you yet again. Bleh.

I know this sounds negative, and I wish I could have had better news, folks. It didn't change the film for me. If it does it for you, if it was everything you wanted it to be, then congratulations. I'm glad, I really, really am, no sarcasm. And despite the fact that I'm still lukewarm on this one, and not much more excited for Suicide Squad, I've hardly hung up the towel on DC. I am super excited for Wonder Woman. The trailer from San Diego Comic Con was easily my favorite of any trailer or footage shown at SDCC this year, and I cannot wait for that one. Honestly, if somehow Wonder Woman is not a good movie, I will cry. Legitimately, on the sidewalk, outside the theater. This is my most anticipated live action DC film since.... The Dark Knight Rises, I guess. And it already looks better than that disappointment.


So, there it is, my thoughts on Batman vs Superman: Buttfleck Edition. Hopefully you'll join me here again, I have a Batman: The Killing Joke review in the works now and we'll also be heading out to see Suicide Squad tomorrow. So until then, what did you think of the BvS Supercut? Did it do anything for you?